Regardless of the design approach, the main goals of the pulsation study are:

First, for a DA1 study, an analytical study can be used together with some good design rules for good support/restraint principles. Often this study involves a simplified analysis in order to determine the acoustical resonance modes in a system based on the assumption of an open-open, open-closed, or closed-closed system. An open boundary condition can be a location with approximate constant pressure such as a suction tank, and a closed boundary condition can be a location with no flow, such as dead-end branches.

The DA1 study can be conducted relatively fast without detailed information about the piping system. The main quantities of interest are the distances between the suction vessel and the pump inlet, but the exact routing with bends and tee’s is not always necessary.

A DA2 study uses an acoustical simulation (in a pulsation software package such as BOSpulse) in order to calculate the pulsation amplitudes. The pump, damper and pipe routing are modelled, and a calculation of the acoustical resonance in the piping network can be made. This study requires more information about the system than DA1, but can predict the acoustic resonance frequencies with more accuracy as well as the actual amplitude of the pulsations in the piping.

So what are some of the main difference in the results between the design approaches?

There are probably a wide range of opinions about this, but below is an illustration purely from the perspective of a pulsation analysis.

To illustrate these points, we can conduct both design approaches on a system. Let’s look at the system below involving the suction side of a reciprocating pump. Two pumps are modelled of which one pump is a spare. The pumps are of the quintuplex type and are running at a speed of 5 Hz.

The acoustic resonance frequencies according to DA1 (based on the closed/open open/open modes above) are given below.

DA1 can be conservative as it only takes into account the acoustic resonance frequency, not the actual amplitude

According to the DA1 study, the pump speed should have a separation margin of +-20% on any acoustic resonance modes. Based on the pump speed of 5 Hz with 5 cylinders, the range of acoustical resonance frequencies that should be avoided are 20 –30 Hz and 50-70 Hz. Where a margin of +-/20% has been used based on the reasoning in API 688 for uncertainities. From the table above it can be seen that there is a clear overlap between these and this system will fail DA1. It should be noted that if the pump was only single cylinder at 5Hz then conformance with DA1 would have been possible as all resonance frequencies are above 12Hz (2nd harmonic +20%).

Figure below shows the actual pulsation amplitudes as calculated using design approach 2. This figure shows that even though acoustic resonance modes exist, the final pulsation level is within allowable values.

The figure below shows the acoustic resonance modes of the system using BOSpulse. These can be identified at ~17.5Hz and ~39 Hz. The DA1 study does not predict any resonance near the 17.5 Hz.

The figure below shows the resonance mode at 17.5Hz, which is a complex mode involving the modes between (1) the dampener and the suction vessel and (2) the spare pump and the suction vessel. This mode cannot be captured using the approaches in DA1. Furthermore, depending on the approach used the DA1 study can predict several modes that will actually not exist in the system.

In conclusion, a DA1 study can be a good and fast initial check to identify any critical acoustic resonance modes for simple systems preferably these are without any similar ratio tee connections, short in length and have a low number of pump cylinders. For more complex systems, or if DA1 study shows acoustic resonance can be an issue (likely to be the case for long discharge systems and high number of cylinders), a DA2 study is likely to be needed. 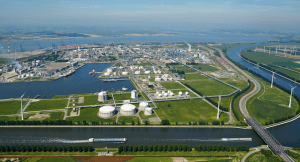 Air Liquide and BASF want to capture and store the CO2 of five factories at the BASF site in Antwerp. Dynaflow was requested to perform 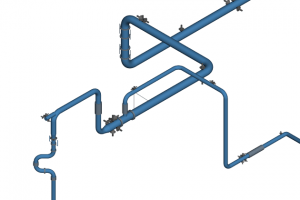 Combined Pressure Surge and Dynamic Stress Analysis Introduction In the harbor of Antwerp an unloading line was being commissioned for use with cyclohexane. This line 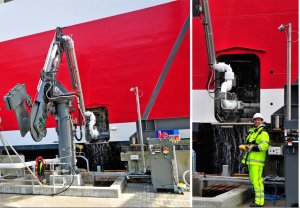 Pressure Surge Analysis Introduction An LNG-plant was planning to construct an additional LNG bunkering line that will be used to fuel ferry ships in Stavanger.